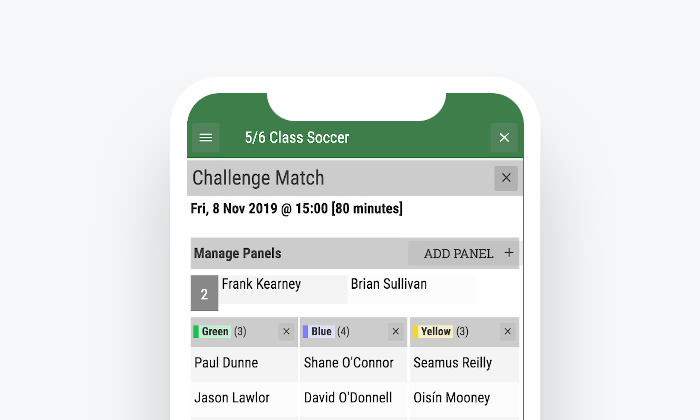 More common with younger groups, but managing groups of 40 or more players brings its own issues.

Delegating the workload.
Organising coaching and training sessions
Balancing selection for underage games
Picking teams based on who will be available

SURPASSPORT simplifies managing communications, availability and teams, and in keeping a balance of opportunity where young players are concerned.

Every squad has multiple coaches, but large squads often have multiple managers too. No problem! SURPASSPORT is multi-user, which allows the entire coaching team access team records, from their own account, including attendance recording, where two or more mentors can welcome the kids as they arrive.

SURPASSPORT allows each player to be assigned one or more ‘tags‘, where a tag is an arbitrary word or short phrase. This ties in with player selection filters, greatly simplifying extracting a group of players.

A little extra magic happens when colour names are used as tags, and then the tag is presented in that colour, making identification even faster.

For Skills Coaching sessions, enabling ‘bib’ assignment can add another dimension to grouping players to rotate through various stations. The bib colour is automatically assigned when the player is checked in, and avoids an extended break during a time limited training session to break into smaller groups.

For older kids, this might allow three easy grouping calls: “All B-panel players go with Stephen”; “Everyone wearing a green bib run over to John” and “Defenders, head on over to Mike”. Or even, “pair up with someone wearing the same / different bib colour”. Plenty of additional options!

One squad, multiple teams .. at the same locations

More common with Under 10, teams may only be picked at the venue, base don who has turned up.

SURPASSPORT supports this with ease, where the panel can be split at the last minute, and are assigned as A, B, C, .. teams. This works to keep a record, but also facilitates each team to be managed for Team Sheets and what else is needed.

Of course Availability, Attendance and the usual features apply, making this ideal for when underage development squads get to play against other squads, usually in matched teams for optimal coaching benefit.

Bigger clubs with a strong emphasis on child centred coaching look to avoid premature segregation of teams according to their ability, and in doing so encounter a new challenge. Parents need to be asked, but coach doesn’t yet know which match the child will be assigned to until the responses come in. Classic Catch-22!

SURPASSPORT includes the concept of a ‘placeholder’ activity, which appears on parent’s future view and supports requesting Availability. Once availability is known, the manager can he finalise the two, three or four (or more) teams, and assign them to their own League / Cup Match record. Parents are notified with the update and Attendance, Team Sheets & Match Play are then fully supported.

This can be further simplified using the ‘tags’ feature mentioned above, where players can be bulk selected by tag, perhaps a colour assignment as is common in many clubs.

One added benefit of setting placeholder entries for league fixtures is that parents often preemptively indicate unavailability (or availability), and also if they have an autoresponder set for, say holidays, meaning that coach is fully in the loop too.

Any cookies that may not be particularly necessary for the website to function and is used specifically to collect user personal data via analytics, ads, other embedded contents are termed as non-necessary cookies. It is mandatory to procure user consent prior to running these cookies on your website.